Tracking the arrival of the Hermione was not all that easy! For days, even weeks in advance we followed up on the exhaustive list of Hermione events in Newport alone! What must it have been like in Philadelphia, New York or Boston? 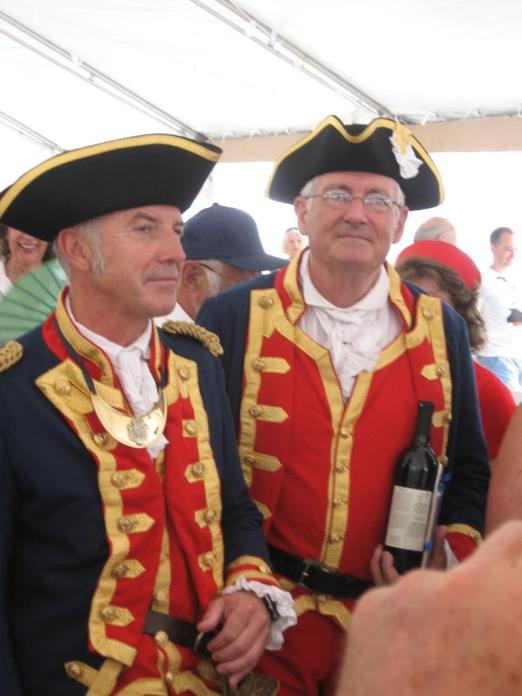 The plan for day 1 afternoon was to enjoy a fine lunch overlooking the entrance to the harbor at Newport. Ocean Cliff luncheon was a fundraiser for the Alliance Francaise of Newport and the Newport DAR.  Since I was a member of both groups in CT I suggested to our group of 8 that we purchase VIP luncheon tickets well in advance, which we did.

The day was forecast to have scattered rain off and on throughout the midday hours.  We arrived at Ocean Cliff to find it was indeed on a cliff high over the water affording a perfect view of the ship when she sailed into view.  We were thrilled until we found that there were so many people signed up that there were not enough tables inside. There were nearly 230 of us for lunch!

Having signed up early we thought that seating would not be a problem, but when we reached the sign in table we found that we were seated outside!  Scattered showers were forecast, and the sky was getting darker and darker.

We alternated our sun hats and our umbrella until it was time to go inside to line up for the generous buffet lunch.

Little by little we realized that the rain was subsiding as we exited onto the high plateau to find our large round table.  We had ringside seats! We had an unobstructed view of the harbor. Moi of little faith!

Soon everyone inside began to cluster around the huge windows while we simply sat in comfort to watch the unfolding of the scene before us on the water far below. There she was at last, our first sighting of the Hermione, Freedom Frigate of the Marquis of Lafayette!

My husband, John, must have been bitten by the get-the-best-photo bug, for I saw him disappear over the crest of the steep green lawn, not unlike that of Washington’s Mount Vernon, in pursuit of the closest shot of the frigate.

The French frigate was preceded by an accompanying sloop, then the firing of cannon to announce the arrival of this famous frigate that had come from so far away to spark our memories of America’s friend, Lafayette who came to help us fight for our freedoms. Then emerging from the trees that ringed the shore, into full view, was the Hermione!  I had been waiting to feast my eyes on her for nearly 23 years.

You could feel the thrill pass through us, the onlookers, as we cheered and then hushed to let the enormity of this event sink into our brains. We were witnessing history repeating it self before our eyes.  It was a re-enactment par excellence!

After about 2- minutes she passed out of sight as she headed for Fort Adams and her waiting dock. We turned to our food and to our personal reactions to this finely –planned arrival.  No, Lafayette was not there in person, but there was a band playing French music and a general sense of good feeling between our two countries., France and America!

Although France was our first friend in 1778, the liaison has been tenuous over the 2 plus centuries since.  Even recently, relations have been strained.

But today we put all that behind us and we sang the Star Spangled Banner and the Marseillaise together as one.

Inside Ocean Cliff everyone gathered to thank all the local and French groups who supported this coming together of two old friends with speeches and much applause. We stood by the door with misted hair and teary eyes to add our applause to the whole. We salute Rhode Island locals, the supporters of Washington-Rochambeau Revolutionary Route (W3R), Lafayette Society, The Society of the Cincinnati, Sons and Daughters of the American Revolution and the many other groups who made this luncheon such a success! Huzzah! 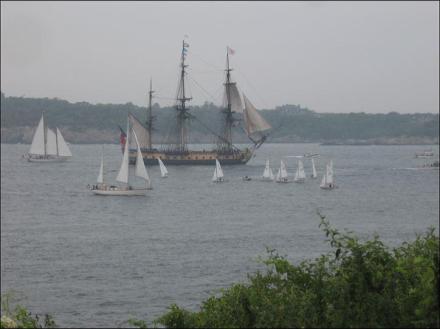 More accolades given by French dignitaries:

Bernard Grasset, Mayor of Rochefort, Charente-Maritime, where the frigate was built, describes the voyage of the Freedom Frigate “as an exciting new chapter inn US-French relations.”

Mme. Segoleme Royal, President of the Poitou-Charentes Regional Council and Minister of France, refers to the 16 year building of the frigate: “Lafayette’s Frigate of Freedom as being brought back to life”. A beautiful arrival was celebrated by us all!