I promised to keep you up to date on her schedule.

Here is the latest in the way of a link to follow much of her route.  More to come:

Use email address on the invitation below for more information:

From the text of my book: She had a fabulous, but in some ways, a daunting, unforgettable day! 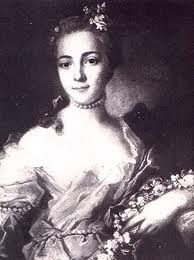 The young bride of the up-and-coming hero of Namur and Laufeldt, by dint of her husband’s recognition by the king two years prior, would be presented at court as a matter of course. On March 1, 1750, Jeanne-Thérèse, the daughter of Emmanuel d’Acosta, walked proudly into the king’s presence escorted by her mother-inlaw, the Marquise de Rochambeau and Marie Eléonore de Maillé de Carman, Comtesse de Sade, daughter of Rochambeau’s godfather.

It was de rigueur for the three women to make three graceful curtsies to the king.

Then Louise-Elizabeth, Princesse de Conti, stepped in to personally present Jeanne-Thérèse to His Majesty King Louis XV, who spoke a few words to her. After meeting the king she turned to the queen, to her ladies-in-waiting, and then finally to the dauphin, curtsying to each before exiting the room.41 Following court tradition, the three ladies in their sumptuous gowns, while continuing to face the king and queen, walked backwards curtsying all the way to the door.